I had been brought up into the Boro tradition. My dad departed to Ayresome Park every Saturday and would return at tea time to tales of woe, never again, never again. Another nail in their coffin... before setting out the very next week again for our local sporting citadel. Why don't you take Robert, my mam asked one week. Yes inflict a lifetime of Middlesbrough misery on him too, she might have mouthed and so I entered the world of supporting my local team. Captivated by the pea green pitch, finest in England they said. The aromas of piped tobacco and cigar wafting with beefy bovril between behatted, overcoat bedecked men. Then out there on the stage, our number 9, hero of every park, school playground, suburban road and driveway ad hoc pitch, Big John Hickton, arrowed a shot low, mean and hard into the corner of the net. From then I was ensnared, smitten. Big John would go on to score so many goals and would be especially known for his long penalty run ups before invariably smashing the ball past the keeper and into the net. And so a lifetime passion and obsession was born.
Twenty five years onwards but not upwards, at least not in football terms and Middlesbrough announce they are leaving Ayresome for good. A new chapter will open on a playing field down by the Riverside. This Edwardian jumble of red brick and corrugated roofs will tumble and fall to the wrecking ball and be consigned to the pages of football history books. After one last emotional goodbye on a heady blue-sky promotion clinching day in 1995 the contents, fixtures and fittings are to be auctioned off. I find myself bidding against a brewery for stand names and direction boards. It is an uneven contest. Then as I fix my gaze across the filled room I see for once the brewery bidder's arm still by his side. I seize my opportunity and bid. Unopposed. Gettinthere. £12 (including tax) to the gentleman.. for the his and hers wooden toilet signs... Ah, so that is why no one else bid..
I followed this up by buying the first house to be built on the site of Ayresome Park. A couple of feet from my front garden would have been the corner flag. If I look out of my bedroom window I can see a penalty spot. And I can remember the long, long run ups that John Hickton our sharp shooting centre forward took, starting somewhere like the back garden of that house and moving faster and faster through the dining room and the front room to finally storm down the drive to leave the keeper quaking in his boots planted in the middle of the front room of the house opposite.
For me the dream never dies and those toilet signs are still tucked away in a quiet corner of Ayresome Park. 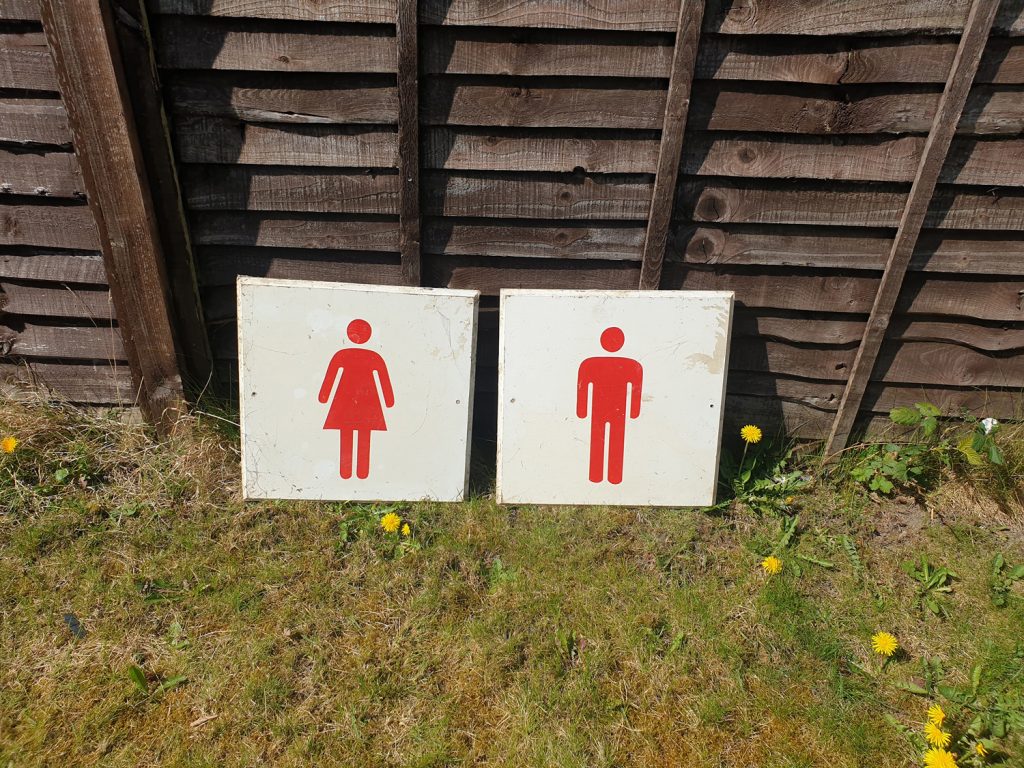